With social media sites on the rise it’s no surprise that you can use sites like YouTube, Twitter, and Facebook to help make your life easier and more interesting. But how can these social media sites help you earn your criminal justice degree?

4 Ways Women Can Improve Their Learning

Men and women look different from each other, they often act different from the other, so it makes sense that they would learn differently, too. This doesn’t mean you can bring back the phrase “girls rule, boy drool” but it does mean that women can improve their learning by implementing these factors. 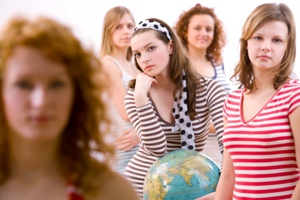 No matter which gender category you fall into, it is important to remember that these factors do not apply to everyone. Each individual learns differently and it is important to understand how you learn and try to fit yourself into a learning environment that suits you. Some individuals tend to learn better in an environment with a large amount of people, others like small quaint colleges, while some would prefer working from home. There are so many factors in regards to education that you need to evaluate before making any big decisions. So while men and women may learn differently, don’t focus as much on that but instead focus on how you learn! And remember; do not feel self-conscious if you struggle in certain areas, no one’s perfect!

Top 10 Benefits of an Online Education

You’ve reached the ceiling in your job’s salary bracket, you’re still waiting to quit your job and start a career, or you’re interested in earning an advanced degree in hopes of a promotion – but, how can you go back to school and maintain your current lifestyle?
College Degrees Today has done the research for you and we have compiled a list containing the benefits of an online education to help you make an informed decision about online learning.

Top 10 Benefits of an Online Education

1. VARIETY. With online education, you can choose from a variety of schools and programs to choose from – and location or re-location isn’t a matter of concern since all of your classes will be taken from the comfort of your own home.
2. COST EFFECTIVE. Online learning costs less than traditional campus schools in many ways. For example, tuition fees are less because the school has no need to charge for overhead, maintenance, or even electricity for classrooms because you’ll be learning from home.
3. TIME EFFICIENT. Along with online education costing less than traditional campus schools, online education is also more time efficient. This is a great benefit for students with a full-time job, family responsibilities, or other obligations that need to be worked around.  With online education, students can forget about long daily commutes, wasting time trying to find parking, or running from class to class.
4. SOCIAL NETWORKING.  In our modern day society, most friends and couples are made over the internet – why should school be any different? A great benefit of online education is having access to meeting people worldwide, rather than being limited to socializing locally.

5. INDIVIDUALIZED LEARNING. Students enrolled in online education have the unique opportunity to learn using the learning style that works best for them; whether it’s by listening to a lecture, reading content, or using interactive media.
6. GO TO CLASS WHEN YOU WANT. The difference between traditional college and online education is the virtual classroom; a flexible schedule allows busy individuals or established professionals the opportunity to log-on to courses whenever it’s convenient for them.
7. LEARN AT YOUR PACE. With online learning, students have the freedom to learn at their own pace without “falling behind” – as long as assignments are completed by their deadlines, nobody has to know you studied Chapter 5 twice!
8. GAIN VALUABLE LIFE SKILLS. Students who complete their degree through online education have been reported to have higher reading comprehension skills, they are able to resist distractions better, and they consider themselves to be self-motivated, self-reliant, and self-directed.
9. AVOID AWKWARD SOCIAL PETTINESS. One major deterrent for older or returning students when considering a campus-based degree program is the social pettiness that accompanies a younger student body.  Avoid feeling pressure to assimilate to younger peers’ lifestyle by completing your degree online.
10. OPPORTUNITY TO FULFILL A GOAL.  Many professionals or busy parents feel unable to complete their degree due to financial, familial, or job-related responsibilities. Earning your degree through distance learning allows you to fulfill that goal without interrupting your current life.

It’s never too late to earn a college degree 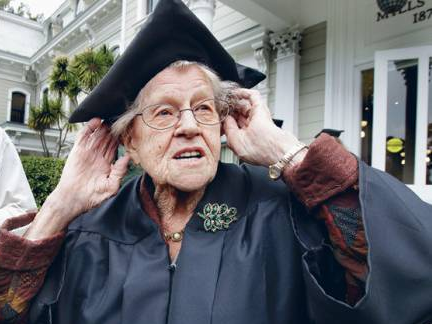 Everyone loves an inspirational story. Overcoming differences, falling in love and fitting in are everyday stories but today I read one about Hazel Soares. Hazel is a 94-year-old great grandmother that just earned her bachelor’s degree in art history at Mills College in Oakland.

Born in Richmond, California, Hazel said she always wanted to attend college. She was born in 1915 and graduated from high school during the great depression which halted her education.

“Unless you had some help, it would have been impossible to go to college,” Soares said. “However I never lost the desire to go.”

She waited until she was 79 to start taking college courses. She spent six years at Chabot College taking classes and finally earned her Associate’s Degree when she was 85. After that, she enrolled at Mill’s College in 2007.

Hazel has a large family, she was married twice, has six children of her own and 40 grand children and great grandchildren. Statistically, she is believed to be the second oldest person to graduate from college. Instead of earning a criminal justice degree or a marketing degree Hazel studies art history because she plans to use her degree to work as a docent at a local museum.

“We are really amazed and very proud of my mom,” said Regina Hungerford, Soares’ youngest child. ”The biggest thing that we can all learn is that we’re never too old.”

Hazel hopes that others realize that it is never too late to go back to school and get a college education. Among other things, Hazel still drives and visits her doctor only once every three years to make sure she’s OK. She also said she doesn’t take any prescription medications.

Kudos Hazel, for being an inspiration to all of us.

“There’s no reason why you could not go back,” Soares said.”Some people do give up the idea or postpone the idea. It’s too late. It’s too much work. They may not realize that once you try it it’s exciting to go to school.”